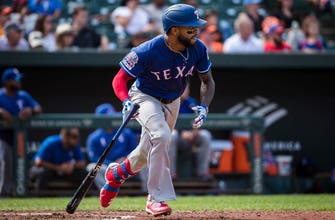 The following is a press release from the Texas Rangers:

DeShields, 28, returns to the Rangers organization after spending 2020 with the Cleveland Indians. Acquired in three-player trade with the Rangers on December 15, 2019, the right-handed batter hit .252 with seven RBI in 37 games with the Indians last season. DeShields started 32 regular season games and both of Cleveland’s A.L. Wild Card contests versus New York in centerfield. He was not tendered a 2021 contract by the Indians on December 2, 2020.

The 30-year-old Gaviglio has pitched in the Majors in all or parts of the last four seasons (2017-20). He made four relief appearances over three stints with Toronto in 2020, allowing three earned runs in 3.0 innings with an 0-1 record.

Texas currently has 63 players on its spring training roster, including 23 non-roster invitees.